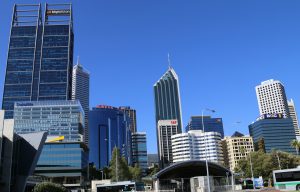 More than most cities, Perth is impacted by the cyclical nature of the global economy. The boom/bust cycle is engrained in our economic history, from the gold rush to the “resources boom”.  Given the size of the city and population, we are dependent on trade, particularly international trade.

WA is, and will remain, a resources city first and foremost. As outlined, the current resources boom surpassed previous booms in Western Australia. Gorgon is the largest resources project in Australia’s history.

According to the Federal Government, in 2008-2009, the mining sector accounted for 25.3% of WA’s Gross Value Added (a measure of industries’ contribution to the State’s economy). By 2015, its contribution to the state economy was approximately 37% of GVA (Curtin-Bankwest Back to the Future). More than any other State our economic fortunes are tied to one industry.

The chart, shows the value of each commodity in Australian Dollar terms. WA’s economy will remain dependent on the price of iron ore well into the next decade. 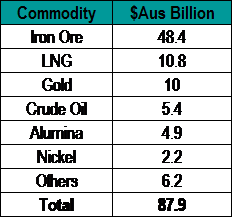 In October 2016, the State Government, Housing Industry Forecasting Group made the following forecasts on housing construction in WA between 2015 and 2020.

No matter who will deliver the next stage Budget, repairing the Budget and creating jobs will be key challenges.  The looming March 2017 State Election will play an important role in shaping WA’s economic and property performance.